“To yield to Resistance deforms our spirit. It stunts us and makes us less than we are and were born to be” Do YOUR Work

It’s amazing the hell you go through when you are trying to grow from one level to an even higher level mentally, spiritually, ethically or morally. The enemies of transformation are multifarious and ferocious! Doubt, fear, memories of past failures, heart palpitations, HDTV and the worst of all, procrastination.

Agents of resistance all designed to keep us ‘stuck’ and paralyzed by the pain of wondering. Wondering at the sheer possibility that we could dare to become what we see in our dreams and the quiet moments between the hustle and grind of making a living.

Inflicting pain that’s often worse than the searing strain and effort of actually doing the work required. What keeps us from doing what we long deep down in our guts to do? Who is that naysayer within? How can we avoid the roadblocks of any creative goal like starting up a business venture, writing a novel, starting a family, or painting a masterpiece?

Bestselling novelist, thinker and creative visionary in Steven Pressfield in the The War of Art identifies the enemy that every one of us must face – RESISTANCE. His insightful book outlines a battle plan to conquer this internal foe. The War of Art emphasizes the resolve needed to recognize and overcome the obstacles of ambition and then shows us how to climb to the highest level of creative discipline.

I realized that this enemy is as common and prevalent as gravity. Resistance is the earth curse trying to maintain its balance. But our dreams are more powerful and Resistance can not survive the quiet resolution of our will in placing ourselves within the task, like an artist before an easel, a writer staring down the blank screen and breathing deeply before typing ‘Title’ or the business person refusing to let a partner’s decision to quit stop him.

“Resistance means, Putting your ass, where your heart wants to be. Just sit down and do the work!”- Steven PressField

The writing is tough love and coming from an author who struggled for decades before his success with his book, The Legend of Bagger Vance, you can take the punch and maybe a well-placed left hook that will inspire you to seize the potential of your life.

“Late at night, have you experienced a vision of the person you might become, the work you could accomplish, the realized being you were meant to be? Are you a writer who doesn’t write, a painter who doesn’t paint, an entrepreneur who never starts a venture? Then you know what Resistance is.” says Steve Pressfield 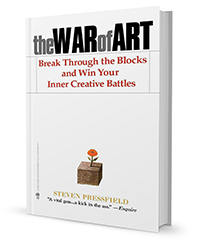 Resistance is just the bully in the school yard, dealing with its own pathetic future and secretly terrified that we may one day stand up to it. We fight against taunts and the onslaught of doubt and self defeat, we fight for our very souls, we fight the temptation to kick the can down the road to another generation.
Till we dare say, “I want that!” and take that sucker down!

2 thoughts on “The War of Art – Fighting the Resistance”